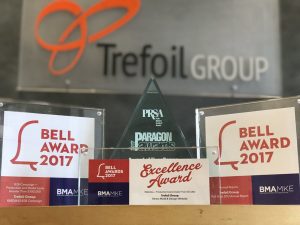 Earlier this month, Trefoil Group was recognized with a PRSA Paragon Award of Excellence, the organization’s highest honor, in the Online/Website Tactic category for the creation of a redesigned website for Endeavour, a Wisconsin-based real estate developer. The firm was honored for effectively repositioning the company and establishing a powerful online presence.

“This award is a testament to the abilities and execution of our Creative and Digital Team,” stated Mary Scheibel, principal. “To be named a recipient of a prestigious Paragon Award just speaks to the level of professionalism, dedication and service that we provide to each and every one of our clients.”

In April, the agency also received several recognitions from BMA Milwaukee including two awards of the highest honor—the BMA Bell Award. Trefoil Group received a Bell Award in the B2B Campaign category for its introduction and swift establishment of YARDMAX® in the outdoor power equipment market. This product launch afforded Trefoil Group not only the opportunity to introduce a new line of outdoor power equipment, but to turn a challenger brand into a contender. The agency utilized an integrated, cohesive strategy across a range of marketing communications including digital, advertising and public relations, playing a key role in the company’s realization of its year one goals six months ahead of schedule.

Trefoil Group received a second BMA Bell Award for its conceptualization and creation of the 2015 Park Bank Annual Report in the Annual Reports category. A creative approach set the tone for this report, as the agency utilized Park Bank’s 100th Anniversary as a springboard towards the future, while honoring its rich past.

A BMA Bell Award of Excellence was also presented for the agency’s work on Metro Mold & Design’s website. The site drew acclaim for its ability to establish a dynamic and engaging online presence for the brand through a focus on innovation and applications.

“To be recognized by not one, but two industry-leading organizations for our agency’s work is such an honor,” stated Scheibel. “These awards truly validate the commitment our team demonstrates and the wide range of talents they bring to our agency.”

In today’s highly competitive landscape, Trefoil Group provides the razor-sharp focus companies need to advance their businesses. Services include communications strategy; branding and positioning; websites and digital marketing; advertising and direct marketing; public relations and social media; recruitment and internal communications, and more. Trefoil Group is a partner of IPREX, a $250 million network of communications agencies, with 1,800 staff and 115 offices worldwide. For more information about Trefoil Group, go to www.trefoilgroup.com or follow on Facebook and Twitter.

About the Author: Trefoil Group

We’re not going to waste your time telling you how smart, creative and great we are. The fact is, it’s not about us – it’s all about you and helping you grow your business.